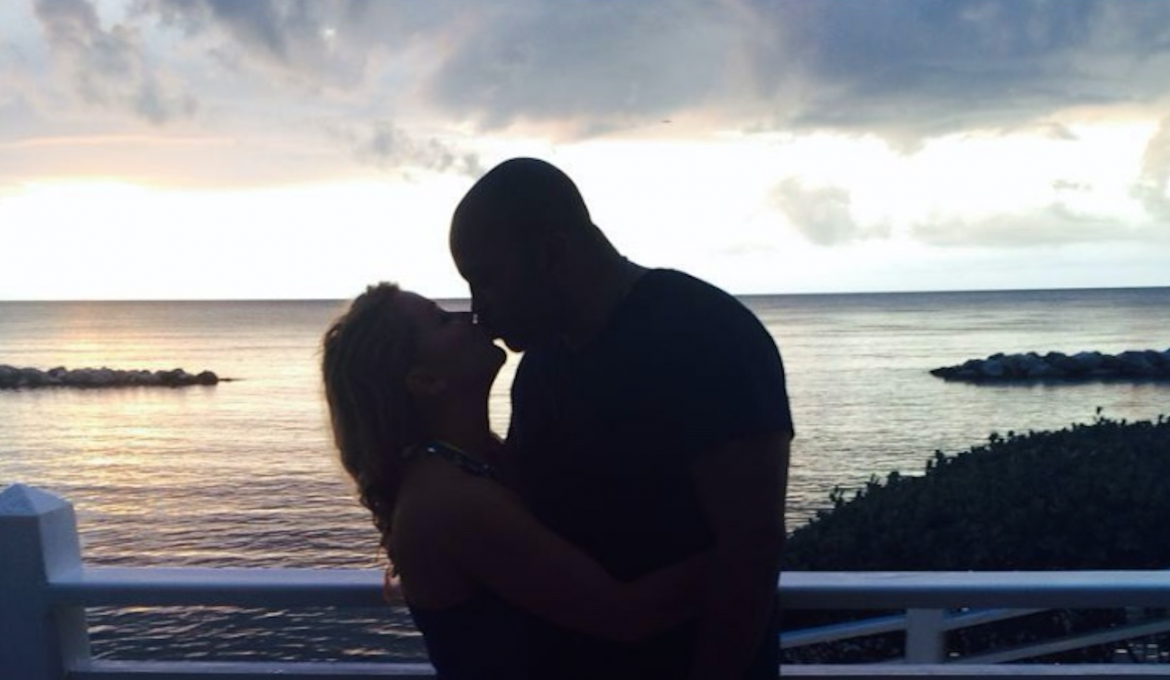 They don’t follow a mold and often take unexpected turns. Sometimes huge wrenches are thrown into the plot that appear on the surface to be the end, but beauty can rise from ashes.

This the love story of Dell and Lena Gines and you’ll see shortly what I mean.

Junior high is such an awkward time in everyone’s life. There are those hormonal changes, physical changes, and environmental changes as you transition into adulthood. School dances are perhaps the epitome of what mark all these experiences together.

I went to a small school that was also affiliated with a church and the leaders of each entity decided to combine both entities into a youth group/school dance that they named “Harvest Party.” I don’t remember much about the party, but I do remember there was this guy at the party who had a flat top, coke bottle glasses, and resigned to crutches due to a recent injury.

He was a sad sight at the school dance, but he made the most out of his situation by drawing portraits of people for $3. I saw some of his portraits and decided for myself it was worth the wait to have him draw a picture so I hopped in the line. I watched as he studied my face and carefully drew in the details of the portrait. When he completed, he signed his name at the bottom and I handed over the $3.

Later in the evening, I met with him again to help him down the stairs (due to the crutches) and never saw him again.

That is, until a few years later.

I started out at a public school for high school, but eventually went to homeschool my parents decided it was in my best interest. This afforded me the opportunity to work at a fast food place during the day and still do school later in the afternoon/evening at 15 years old. When you work somewhere long enough, you start to pay attention to the “regulars”. There was this guy that came in for lunch one afternoon and I immediately took notice when he walked in. We kept exchanging glances during his time there as if we both recognized each other, but couldn’t pinpoint how.

After coming in consecutively for 2 weeks, he mustered up the courage to ask for my number. He was 19 at the time and I was 15. The problem was I couldn’t date until I was 16. I told him in order to go on a date that he needed to ask my parents. Much to my surprise, he agreed.

We still hadn’t make the connection at this point.

He came over to my house one evening to meet my parents. The 4 of us sat on the couch and made small talk until my parents asked him his last name. “Gines”, he answered. They recognized the last name and when they asked about his parents, it confirmed that they did indeed know his family. Then history started to unfold as I learned how our paths intersected a long time ago.

When we were little kids, both of our families used to volunteer at a non-profit on Saturday mornings and us kids were responsible for licking envelopes. We had done this for years and been around each other, yet never realizing it until this moment.

My parents immediately approved of us dating and allowed me to go to a concert with him in the coming weeks. The crazy thing is that a few weeks later as we were hanging out, he walked into my room and saw that drawing of me from 8th grade hanging on the wall. It was that geeky boy on the crutches that drew that picture. The same one that I’ve found a love connection with.

Dating was deja vue for 2 years. While we were both physically attracted to one another, it was our deep spiritual and emotional bond that marked this time. We got engaged fairly quickly and by the time I was 18, we got married. Kids were always on our radar and even during our premarital counseling, we both told them we wanted 5 kids.

What we didn’t expect was how quickly it would happen. It was only 19 months after marriage that we welcomed our first daughter. Then even before she turned one, we were pregnant with #2. I made the difficult decision to stop going to school to raise our babies.

At the ripe age of 22, I was a stay-at-home-mom fully engulfed in sleepless nights. We were very young and still trying to figure things out.

Being a young stay-at-home mom was very lonely. While most of my friends were our partying or having a good time, I was tied down caring for our babies. Dell didn’t feel as tied down so he kept living the life of a guy in his mid-20s. He continued to go out with his friends and stay out until the early hours of the morning.

At the time, I had no idea if this was normal. So for several months it went on like this and he convinced me that he needed “guy time”. It was all very confusing to me what to accept as normal or what were warning signs. A friend of mine was telling me that he had gone astray. I had my own suspicions so one day I asked him. He admitted to having several affairs. (More details here)

We didn’t talk for several days after the confession and made it a point not to be around each other.

My sorrow turned to shame. Was our connection a lie? Does he not love me? Am I not good enough? I was barefoot, pregnant, and not in the best shape but I was trying so hard to be a good wife and mom. These affairs robbed me of my self-esteem and while I loved God, I was angry at Him.

We had separated shortly after the affair and I went to live with my parents. The next 6 months were really touch and go- communicating only with Dell out of the interest of the kids. I felt that my marriage was over.

I remember one night after I had tucked the kids to bed, I sprawled on the floor and was crying- smothering my cries so I wouldn’t wake them up. I cried out to God, “I want You to release me from this marriage, but I’ll stay if you want me to.” Why should I have to suffer? I didn’t do anything wrong.

Had it not been for God, this is where our story would end. But it didn’t.

During this time, Dell was pursuing me and wanted to be a good husband. He confessed everything. Multiple affairs are a lot to stomach.

Someone encourage us to seek counseling in this time. They believed that Dell was a Godly man that fell astray and when the reality of his indiscretions hit him, he took in the full magnitude of what it meant.

We pursued marital counseling together and personal counseling alone. Despite the circumstances, we found out during this time that we were expecting our third. A thought crept in my mind. Maybe God intended for this child to help restore our relationship and bring it back into balance. We worked hard during counseling and I could feel God was starting to heal my broken heart.

We had come to realize that there were cracks in our foundation even though we had done everything “right”. We essentially had to start over and rebuild. When I made God the center, it helped me learn to love and trust Dell again.

Marriage takes a lot of work. We’ve been married now for 23 years and have weathered infidelity, loss of close family members, and miscarriages. I can say now that our marriage and love for each other is stronger now than ever.

“These have come so that the proven genuineness of your faith—of greater worth than gold, which perishes even though refined by fire—may result in praise, glory and honor when Jesus Christ is revealed.” 1 Peter 1:7