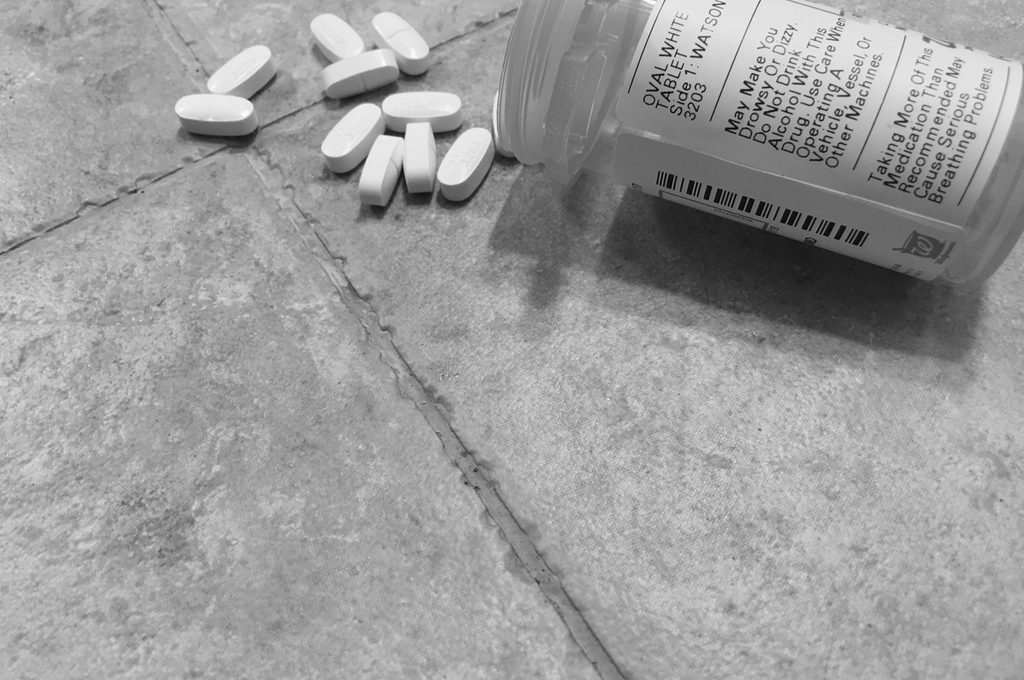 Was he drunk this early in the morning? That’s unusual. Christian avoided alcohol because his mom died from it and we were together the night before. Neither of us were drinking. Impossible.

It was early April, the same month as our upcoming two year anniversary, I remember turning to Christian when we woke up and I couldn’t understand a word of what he was saying, his speech was slurred. Our 6-month old was in the other room and Christian started panicking. He insisted that he wasn’t drunk and thought he might have had a stroke, so we woke her up and drove to the hospital to get a better diagnosis.

Two single letters have never been more crushing to hear in my life. The thought that he might be drunk was a wishful memory at this point. Where had this come from? He played sports growing up so the injuries could have finally caught up to him. Or maybe it was his bad nail-biting habit. Could he have contracted some bacteria that triggered the nerve pain in his body?

The slurring eventually resolved, but other symptoms appeared in its place. He had nerve pain that would come and go leaving his fingertips and hands feeling numb. He couldn’t work without his hands. As a homicide detective, he would need to have full control of his body to do his job well.

But relief was just around the corner. Our doctor prescribed pain medication to help Christian cope-  while not removing the effects, it would minimize the disruption MS has on our lives.

Looking back now, I wish I would’ve said more before the doctor wrote out that prescription. You see, Christian has an addictive personality. He was a former smoker, then he turned to cigars, then to chew, soda and energy drinks, and eventually compulsive shopping. He moves from one addiction to another, relying on something to manage with life. His mom was always drunk (a mean one at that) and his dad is a big time smoker.

Addiction was a family trait.

Once he got a taste of the pills and saw how they worked on his body, he was hooked. It would start with taking them in shorter intervals than prescribed to experiment the side effects of increased dosage. His monthly bottle wouldn’t make it through the month, he had to go back to get more. All the time.

But that’s the funny thing about any addiction. Your body adapts and you have to increase your intake to feel the same effects. This was no different than any previous addiction he had. Things were about to get even worse.

I’ve had chronic pain myself so I had my own prescription of painkillers- only taking them when my neck/facial pain was excruciating, but never proactively.

We were in Mexico for a wedding one weekend and Christian had ran out of pills. It was as if he was a completely different person; depressed, anxious, and in constant pain. All he wanted to do was spend time in the room and not leave. I walked into our hotel room one afternoon and caught him sneaking pills from my bottle. I confronted him saying, “What are you doing?”. He turned towards me revealing a look of guilt. “If you would have asked me, I would have given you one.” He confessed that he thought he was experiencing withdrawal and that he needed just one to feel better again. And it worked. One pill and he was back to his normal self.

Then the effects would wear off and he would continue asking for more and more of my pills. It’s so hard to look at a person you love who is clearly hurting and refusing to give them pills. So I didn’t refuse.

And before we left Mexico, he had completely emptied my pill bottle.

We returned from our trip and I made an appointment with our pain doctor for issues I was having and was diagnosed with an early onset of fibromyalgia. I’m not the type of person that wants to be on medication, but from that diagnosis, I was given a muscle relaxer, sleeping pills, oxycontin, oxycodone, and a nerve blocker.

So Christian’s on hydrocodone and I was prescribed oxycodone- taking different types of pain pills for different types of pain. He was getting into my pills. I could tell because they were slowly disappearing. He was experimenting mixing the pills and it got him very high. I remember one night during dinner he had taken so many that he couldn’t pick up his food with his fork.

I told his doctor.

He immediately dropped Christian as a patient but referred him to another specialist that could prescribe more anti-addictive medication. I continued keeping track of the amount of pills he was taking and eventually realized he was ingesting 4x the amount prescribed.

Christian’s mom unexpectedly passed away last year. One of those freak accidents that you only hear about in the news.

As a detective, he was always the one to deliver bad news; never one to receive it. I had personally dealt with a lot of death while growing up and in my life, so I understood the logistics of grief. I took over the funeral planning process instinctively, but I wonder if I shielded him from confronting grief.

Looking back, maybe I should have made him do those things, allowing her death become more final. He took less than a week off work to settle things. Death this close to him was not something he was accustomed to and he didn’t know how to deal.

He detached himself from the situation and became a machine. Perhaps if he ignored the grief long enough, it would eventually go away. He wasn’t communicating at all and still angry at his mother for her addiction, the childhood she put him through, and me for telling his doctor about his ongoing addiction. This tragedy only fueled his addiction and created a bigger gap between us. We were barely hanging on.

Shit. We were just on the way out the door and our youngest daughter had locked herself in the car. She has also managed to get herself buckled up. Breathe, Bethany, breathe.

It was September so fortunately, the weather wasn’t hot.I frantically called Christian to come home with the spare. He arrived about 20 minutes later and unlocked the car. I made a mental note to set up on OnStar on my vehicle so that if this were to ever happen again, I could unlock the car with the app.

Christian’s email was registered to the vehicle so I reminded him over the next week to check his email for verification. A week had passed and he never confirmed if it came or not so I decided to take matters into my own hands. We were on our way to a fair when I was flipping through his email to locate the OnStar setup email.

“That’s strange”, I thought. There were a string of emails from Twitter notifying him of new direct messages on his account. No big deal, I’ll keep looking for the OnStar email.

In the preview of one of the Twitter email’s, there were three words that caught my eye: “Love you too…”

I opened up the email and read the entire message. I couldn’t believe it. I turned to Christian and said, “Is there something you need to tell me about a woman named Jennifer?” He turned pale. He fumbled for his next words, “I was going to tell you, I already broke it off with her…” or something to that effect. My emotions took over and the screaming that ensued over the next few moments are things I can’t ever take back.

Things that I can’t erase from my oldest daughter’s memory as she was crying the back seat of the car begging for us to come back inside.

I had to know for myself, I had to call her. I wasn’t as angry at her, though. I know oftentimes in affairs that the husband paints a different story than reality.

Christian had told Jennifer that I knew about the affair and was “Ok” with it. Of course, she started to suspect this was not the case when he was telling her not to communicate with him during designated times. He even gave Jennifer the impression that he was going to leave me to be with her. He was enthralled with this new woman. A woman that knew nothing of his addiction or past and could escape her own reality with him. She had become his new addiction.

To his credit, though, by the time I had found the emails in his phone he had already ended the affair. That doesn’t make it particularly less painful, nonetheless. He confessed to everything and both of their stories corroborated. He agreed to go to counseling for both his addiction and PTSD from the sudden passing of his mom.

The time in our marriage before the affair was over- it was dead to me. If we were going to move past this, we had to start over.

He stopped going to counseling earlier this year and the pain from his mom’s death is still unaddressed. I’ve mostly moved on from the affair, but the hardest thing is still the addiction.

He got so comfortable with lying about his addiction and his affair that it is hard to tell when he is being honest at all. I’ve given him several ultimatums, “If you choose the pills, you’re choosing it over us.” He’s had several opportunities, but he doesn’t want to stop. He says he does, but his actions say otherwise.

I don’t know how a marriage can work under these circumstances. He says he’s still fighting for it and that he loves me, but I don’t have the same feelings. I don’t know how to trust him again, when each time I give a little, he is caught lying to me or taking my pills. And I have them hidden, locked up most of them and only leave out a few in random hidden spots. He’s actively looking for them.

We’re living like roommates. Our communication is limited to logistics with our kids. I’m not happy in this relationship and I’m taking it out on the kids. I can’t be the mom that I want to be.

I recently got a job because I’m preparing for what might come. You can’t help but feel like a huge failure. Your marriage has failed, you’ve failed your kids, and you’re cleaning up a mess that someone else started.

But I blame myself, too. For so long I let him take the pills. I made excuses for him, I covered up for him. I thought I was helping him.

If you’re reading this and know someone who is showing signs of addiction, you can still catch it before it gets worse. If a normal prescription doesn’t bring relief then other things need to change- diet, exercise, whatever. A person who’s addicted and truly wants to break free will seek help (without needing ultimatums). They need to admit to themselves they have problems in order to seek help.

I’m so scared for my future and the future of my kids. There are so many unknowns and I have no idea how I’m going to handle everything by myself. It’s just going to be me.

***This could be the reality of the person next to you at the store, the person at school pick-up, your coworker, or anyone you know. Treat people with kindness because you have no idea what kind of day, week, or year they’re having. -Cam***