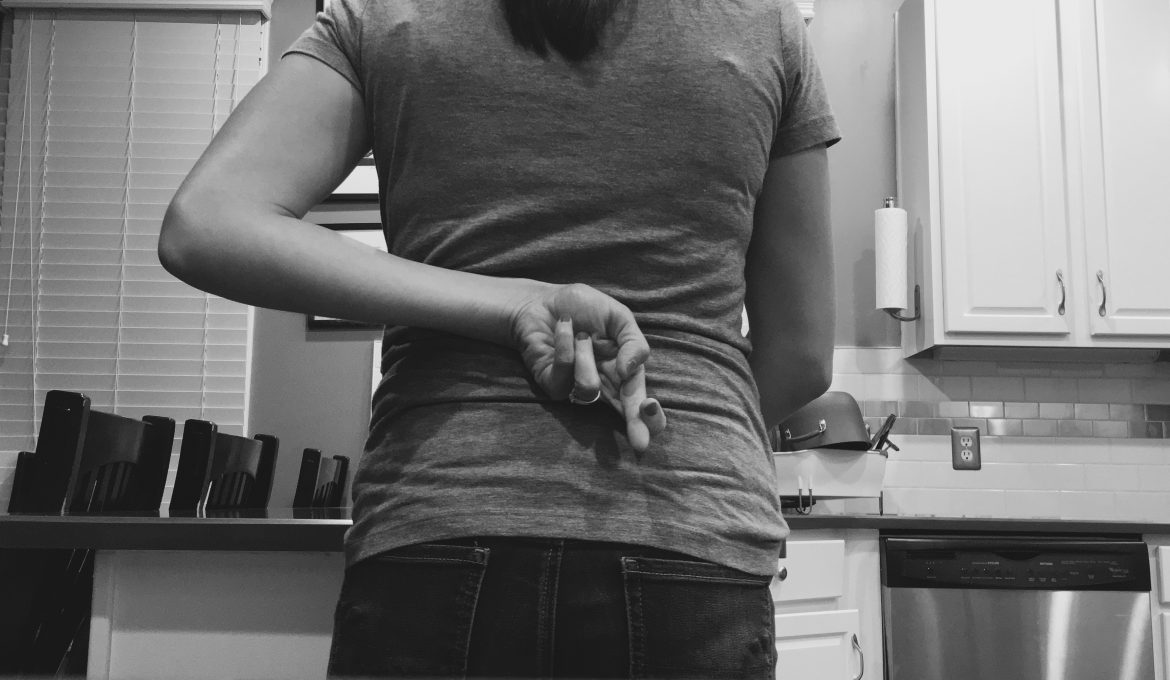 The other day I had thrown away some treasure (read: junky toy) that I thought my kids had exhausted and I made the rookie mistake of not burying it in the trash. My 6-year-old went to go throw something away and immediately said “Hey! Why did you throw away my toy?”

My instinctive reply was “Oh, I thought it was broken.” And the lie detector determined that was a lie. #maury

I quickly tried to back peddle out of the situation and fumbled my responses until I finally confessed the truth. No big deal, right? Lesson learned. I just need to bury it deeper in the trash next time.

The One Incident That Made Me Rethink My Whole Approach

A couple of weeks ago we were baking a cake for Annabel’s birthday- both of the big kids were helping me. We had reached the point where the cake had cooled and it was time to make and spread the frosting. This is always their favorite part.

Evelyn looked longingly at the frosting, waiting desperately for me to invite them for a taste but I was too occupied with spreading it to notice. She piped up and said “Mom, can I try some of the frosting?” I said, “Sure, as soon as I’m done using it I’ll let you try some.”

She couldn’t resist, the urge was too great.

I turned my back for just a second and I caught her putting her finger in the bowl and she scooped up a big heap and plopped it right in her mouth. We met eyes at that very moment and she knew she was caught. The conversation went like this:

Do you see where this is going? We kept going back and forth like this until she finally admitted that it was “80% on purpose and 20% accidental”. Ugh…that 80/20 rule applies even to parenting!

Obviously, I’m not concerned that she ate a bit of frosting, but it was the principle that she didn’t admit to it right away and was lying upon lies to cover up the original lie. Where could she have possibly learned this from?!?!

The Problem With White Lies

What I didn’t realize was how often I did this to my kids. It would be in casual passing that I would say things to them that I thought were completely harmless. For instance:

After that frosting incident, I realized I did it all the time. I’d lie about serious things, silly things, not-even-worth-lying-about things. I had to stop this nonsense.

Now I’m not saying there may not be times we can exaggerate a bit (ie Santa Clause, Easter Bunny, Tooth Fairy, etc.), but I want you to be mindful that if we develop these habits, what are we really teaching our kids? I’ll go ahead and answer my own question.

But then why do we do it? I believe it’s because we think our kids aren’t mature to handle the truth, we’re softening the blow of the truth by avoiding it, or simply because we’re trying to cover our own tail (see first story).

When the epiphany hit me, I knew things had to be different.

For starters, I now run it by them every time I want to throw away something away. It is their stuff and I should respect that about the item even if I consider it trash.

We also give them the real answers to why we can’t do things (eat ice cream for dinner), why we should do things (brush our teeth daily), why they can’t go outside by themselves (there are bad people out there), etc.

We inform them of world events- both the good and bad. For the things that are beyond their maturity level, we give them a modified version which usually means it’s a very high-level, vague explanation.

We also joke with them quite a bit and use our imagination together.